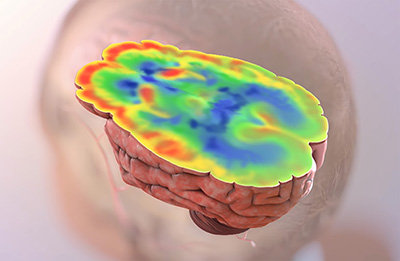 For the first time, scientists have found a connection between abnormalities in how the brain breaks down glucose and the severity of the signature amyloid plaques and tangles in the brain, as well as the onset of eventual outward symptoms, of Alzheimer’s disease. The study was supported by the National Institute on Aging (NIA), part of the National Institutes of Health, and appears in the Nov. 6, 2017, issue of Alzheimer’s & Dementia: the Journal of the Alzheimer’s Association.

Led by Madhav Thambisetty, M.D., Ph.D., investigator and chief of the Unit of Clinical and Translational Neuroscience in the NIA’s Laboratory of Behavioral Neuroscience, researchers looked at brain tissue samples at autopsy from participants in the Baltimore Longitudinal Study of Aging (BLSA), one of the world’s longest-running scientific studies of human aging. The BLSA tracks neurological, physical and psychological data on participants over several decades.

Researchers measured glucose levels in different brain regions, some vulnerable to Alzheimer’s disease pathology, such as the frontal and temporal cortex, and some that are resistant, like the cerebellum. They analyzed three groups of BLSA participants: those with Alzheimer’s symptoms during life and with confirmed Alzheimer’s disease pathology (beta-amyloid protein plaques and neurofibrillary tangles) in the brain at death; healthy controls; and individuals without symptoms during life but with significant levels of Alzheimer’s pathology found in the brain post-mortem.

They found distinct abnormalities in glycolysis, the main process by which the brain breaks down glucose, with evidence linking the severity of the abnormalities to the severity of Alzheimer’s pathology. Lower rates of glycolysis and higher brain glucose levels correlated to more severe plaques and tangles found in the brains of people with the disease. More severe reductions in brain glycolysis were also related to the expression of symptoms of Alzheimer’s disease during life, such as problems with memory.

“For some time, researchers have thought about the possible links between how the brain processes glucose and Alzheimer’s,” said NIA Director Richard J. Hodes, M.D. “Research such as this involves new thinking about how to investigate these connections in the intensifying search for better and more effective ways to treat or prevent Alzheimer’s disease.”

While similarities between diabetes and Alzheimer’s have long been suspected, they have been difficult to evaluate, since insulin is not needed for glucose to enter the brain or to get into neurons. The team tracked the brain’s usage of glucose by measuring ratios of the amino acids serine, glycine and alanine to glucose, allowing them to assess rates of the key steps of glycolysis. They found that the activities of enzymes controlling these key glycolysis steps were lower in Alzheimer’s cases compared to normal brain tissue samples. Furthermore, lower enzyme activity was associated with more severe Alzheimer’s pathology in the brain and the development of symptoms.

Next, they used proteomics – the large-scale measurement of cellular proteins – to tally levels of GLUT3, a glucose transporter protein, in neurons. They found that GLUT3 levels were lower in brains with Alzheimer’s pathology compared to normal brains, and that these levels were also connected to the severity of tangles and plaques. Finally, the team checked blood glucose levels in study participants years before they died, finding that greater increases in blood glucose levels correlated with greater brain glucose levels at death.

“These findings point to a novel mechanism that could be targeted in the development of new treatments to help the brain overcome glycolysis defects in Alzheimer’s disease,” said Thambisetty.

The researchers cautioned that it is not yet completely clear whether abnormalities in brain glucose metabolism are definitively linked to the severity of Alzheimer’s disease symptoms or the speed of disease progression. The next steps for Thambisetty and his team include studying abnormalities in other metabolic pathways linked to glycolysis to determine how they may relate to Alzheimer’s pathology in the brain.

About the National Institute on Aging: The NIA leads the federal government effort conducting and supporting research on aging and the health and well-being of older people. It provides information on age-related cognitive change and neurodegenerative disease specifically at its Alzheimer’s Disease Education and Referral (ADEAR) Center at www.nia.nih.gov/health/alzheimers.

About the National Institutes of Health (NIH): NIH, the nation’s medical research agency, includes 27 Institutes and Centers and is a component of the U.S. Department of Health and Human Services. NIH is the primary federal agency conducting and supporting basic, clinical, and translational medical research, and is investigating the causes, treatments and cures for both common and rare diseases. For more information about NIH and its programs, visit https://www.nih.gov/.