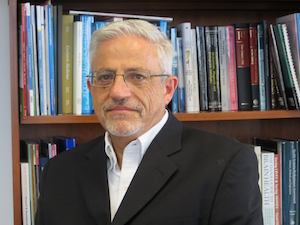 The National Institute on Aging (NIA), part of the National Institutes of Health, today announced that Eliezer Masliah, M.D., a leader in Alzheimer’s disease research, has been appointed as the new director of the Institute’s Division of Neuroscience. An internationally renowned neuroscientist and neuropathologist, he will oversee the world’s largest research program on Alzheimer’s disease-related dementias and cognitive aging.

Masliah joins NIA at an exciting time in research, particularly in the study of dementias. There have been dramatic advances in scientific approaches and technology, which have opened up new avenues of study. Unprecedented boosts in funding afford greater opportunity to build upon these insights.

We are delighted have Dr. Masliah on board” said NIA Director Richard J. Hodes, M.D. “His expertise in leading innovative investigations into the complex mechanisms involved in neurodegenerative disorders will help guide a field determined to find cures for Alzheimer’s disease and related dementias, as well as protecting cognitive function with age.

Hodes thanked Creighton Phelps, Ph.D., for serving as the division’s acting director for the past six months. “Dr. Phelps’ expertise and leadership ensured operations not only continued seamlessly but flourished with the planning and launch of new and innovative projects,” Hodes noted.

In Alzheimer’s disease, the NIA’s Division of Neuroscience leads the NIH efforts through investigator-initiated research projects, developing and supporting new and targeted areas of research, and encouraging collaboration among scientists. Research and training awards support basic, clinical, and epidemiological studies of Alzheimer’s disease and other age-related dementias. The Division’s cognitive aging program administers and develops a research portfolio on age-related cognitive and emotional changes and the sensory and motor disorders of aging.

With input from the wider Alzheimer’s community, the Division plays a key role in developing the implementation research milestones targeting the ultimate goal of the National Plan to Address Alzheimer’s Disease, which calls for the nation to identify effective ways to treat or prevent Alzheimer’s disease and related dementias by 2025.

I’m tremendously excited to join this innovative and dedicated team of scientists,” Masliah said. “We’ve entered a new era of Alzheimer’s research, where collaborations and data-sharing has moved our understanding of the basic biology of dementia light years ahead of where we were 10 or 20 years ago. We still face many challenges, especially in the recruitment of volunteers for clinical trials and natural history studies. But we also have every reason to hope that we’ll achieve our goal of ending the devastation wrought by dementia.

Masliah went on to say that he shares the field’s excitement over recent discoveries—and the potential for additional progress—made possible by new scientific approaches, emerging technologies, and a growing understanding of the basic mechanisms and genetics underlying the disorders.

Masliah received his M.D. from the National Autonomous University of Mexico in 1982. He completed a postgraduate residency training in pathology at the National Institutes of Health in Mexico City in 1986. Following a fellowship in neuropathology and neurodegenerative disorders at the University of California, San Diego (UCSD), he held joint appointments in their departments of neurosciences and pathology.

As head of UCSD’s Experimental Neuropathology Laboratory, he investigated synaptic damage in neurodegenerative disorders such as Alzheimer’s disease, Parkinson’s disease, dementia with Lewy bodies, multiple system atrophy and AIDS-related dementia. His laboratory developed novel models of neurodegeneration as well as new gene therapies, small molecules and experimental immunotherapies for Alzheimer’s disease and Parkinson’s disease. Four of the experimental therapeutic approaches developed at his laboratory have now passed Phase I clinical trials. As the director of autopsy services at UCSD Medical Center, he also directed the neuropathology core of the NIA-supported Shirley-Marcos Alzheimer’s Disease Research Center.

A prolific author with approximately 800 original research articles and 70 book chapters, Masliah has some familiarity with NIA as a past member of the NIA National Advisory Council on Aging, the NIA Neuroscience of Aging Study Section, and the Cellular and Molecular Biology of Neurodegeneration Study Section. He has also served as an advisor in the expert panels to revise the criteria for the neuropathological diagnosis of Alzheimer’s Disease organized by the NIA and the Alzheimer’s Association, at expert meetings and workshops to advise in the use of preclinical models for Alzheimer’s Disease and at a series of NIH-hosted Summits on Alzheimer’s and related dementias. Masliah served as a member of the Scientific Advisory Board of the Alzheimer’s Association from 2010-2016.