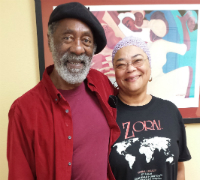 For some residents of Portland, OR, taking a walk down memory lane has taken on a whole new meaning. The Sharing History through Active Reminiscence and Photo-Imagery (SHARP) study combines walking, social engagement, and reminiscence to help promote cognitive health in older African-Americans.

No intervention has yet been shown to effectively prevent or treat Alzheimer’s disease. What we do know is finding a way to conquer Alzheimer’s disease will require all of us to work together. “It is important that as we test possible interventions that we engage as many people as possible, across racial, ethnic, and socioeconomic groups, in innovative studies testing a wide range of activities,” said Nina Silverberg, Ph.D., director of the National Institute on Aging (NIA) Alzheimer’s Disease Centers program.

One study seeking to do just that is being conducted at the NIA-supported Layton Aging & Alzheimer’s Disease Center at Oregon Health & Science University (OHSU) and funded by the Centers for Disease Control and Prevention’s Healthy Brain Research Network.

The 6-month pilot study engages African-Americans, age 55 and older, who live in historically black areas of Portland by combining a variety of activities to see if the activities might, together, help reduce the risks of Alzheimer’s-related cognitive decline.

Older African-Americans are more likely than older white Americans to develop Alzheimer’s disease and other dementias, which may be due in part to the effects of socioeconomic and health-related factors, such as higher rates of cardiovascular disease, which has been linked in a number of studies to higher risk for Alzheimer’s. Yet, in developing health interventions to test for this population, researchers can face barriers, including overcoming trust issues and ensuring that studies are culturally relevant.

Underpinning the SHARP study is design of an intervention that is culturally relevant, engaging, and celebratory, said SHARP project leader Raina Croff, Ph.D., an assistant professor of neurology at OHSU and 2015 graduate of the NIA Butler-Williams Scholars Program. “We intentionally developed a program that draws on the strengths of the community,” she said.

Bringing people and place together

Participant Wiley Barnett, age 80, is committed to regular exercise but sometimes finds it easy to make excuses. “This project reinforced what I planned and intended to do. We’re relying on each other,” he said.

Mr. Barnett also cited social interaction as a benefit he gets from participating in SHARP. “With this program, I have regular social contact with a group of people who are roughly in my same age bracket,” he said.

The 19 participants walk three times a week in small groups along a preset 1-mile route in North or Northeast Portland. During the self-guided walks, participants carry a computer tablet with a selection of themed routes, such as “childhood and family” or “foods and markets.” When they reach a “memory marker,” a sound indicates an image has popped up, along with discussion questions.

For example, a memory marker in the “sports and leisure” theme shows a 1951 picture of a young man playing ping pong at the former Knott Street Community Center. It includes the question “What were your favorite games to play as a kid?”

The participants’ discussions are recorded and will be used to create a digital archive of the stories, as well as community-based sessions about health and cognitive aging, Dr. Croff said. This part of the project is highly motivating for participants, who are concerned about the loss of history and how quickly it’s disappearing, she added.

The area of the city where the participants are walking has changed dramatically in the last 20 years, from mostly African-American to mostly white residents, and from older buildings to newer shops, boutiques, and restaurants.

“You wouldn’t believe if you knew what it used to be like how different it is now,” Mr. Barnett said. “It’s so physically different that it has an emotional impact.”

Dr. Croff has seen these changes firsthand. She grew up in Portland and has often visited the neighborhoods where SHARP takes place. Trained in anthropology and an archaeologist of the African diaspora before entering the field of healthy aging, she was looking for a way to combine her passions of motivating people to be healthy, and preserving history and the stories and experiences of people in the community.

“This intervention is both relevant to our community and is culturally celebratory because it draws on the strengths of the culture and neighborhood history. It also allows participants to give back by passing along stories that will become part of a digital archive,” Dr. Croff said.

By doing something highly motivational and celebratory, the team hopes to increase physical activity and social engagement in a sustained way to reap cognitive benefits.

In this early phase, SHARP aims to engage and build a relationship with participants so that they will want to continue in the program. The study’s long-term goal is to see if the multi-faceted intervention maintains and improves cognitive health. For now, researchers are measuring, through surveys, the program’s effects on participants’ energy levels, type and frequency of physical activity, and number of days that poor physical and mental health impede activities.

“Dr. Croff’s work takes into account the importance of sociocultural factors for health interventions,” said Carl V. Hill, Ph.D., M.P.H., director of the NIA Office of Special Populations. “At the same time, it galvanizes social networks that may help people maintain behaviors that could prove protective for cognitive function.”

Under its Health Disparities Research Framework, NIA supports a broad range of research to understand how multi-level factors, including race/ethnicity, social networks, and educational attainment, affect aging and health. In Alzheimer’s disease, a number of new projects were recently supported, addressing health disparities in dementia incidence, blood pressure, brain health, and caregiver health, among other things.

For the next phase of SHARP research, Dr. Croff plans to adapt the model to include participants with mild cognitive impairment—a condition in which people have more memory or other thinking problems than normal for their age, but their symptoms do not interfere with their everyday lives.

Dr. Croff is also the co-investigator on the African American Dementia and Aging Project, which aims to improve the understanding of age-related memory loss in older African Americans.